Noble Research Institute enables farmers and ranchers to make research-based decisions that benefit their operations and improve the land for generations to come.

At the height of his horse training career, Tom Krshka found a better way. A method that valued natural horsemanship over pure brawn and power. This shift in his colt-breaking philosophy flowed into his 400-acre farming operation in Yukon, Oklahoma, when he switched to no-till in 2007.

Krshka grew up in Yukon and is the third generation to farm his family’s land. He learned hard work right there on the same soil he farms today. When he was young, he spent summers baling and hauling hay. Today, his whole livelihood depends on his forage management skills.

His income is derived purely from his 400 acres of pasture, which is either baled for high-quality hay or grazed by his 120 mama cows and their stocker calves. While he certainly learned a lot growing up on the family farm, the seed that grew into his greatest forage management tactic started in a horse round pen.

Tom Krshka and his daughter, Katy Krshka, doctor a newborn calf with improvised splints that will allow it to walk on all four hooves.

Krshka attended a Ray Hunt natural horsemanship clinic on a dare and a whim in 1988. But, as he drove back from Waco, Texas, reflecting on everything he had witnessed, he realized there were indeed more ways to saddle a horse.

The traditional cowboy-up method favored overpowering prospects, whereas the natural horsemanship worked hand-in-hand with the horses’ instincts and inclinations. It was humbling to learn a new way to train horses. But at the clinic, Krshka learned more than colt-breaking. He also realized keeping an open mind for new ideas and working with nature are always options. When Krshka began reading about no-till farming in Noble Research Institute’s Noble News and Views newsletter, he couldn’t help but draw parallels to his natural horsemanship. Rather than plowing up land, no-till methods naturally improve soil health, while reducing compaction and erosion.

Krshka believes in a higher power, and, to him, farming this way seems to be what God intended. A documentary he watched about the role improper tillage techniques played in the Dust Bowl proved it.

“I’m a naturalist. I love nature,” Krshka says. “To me, no-till is trying to put things back to nature.”

As a bonus, Krshka enjoys more time in the saddle and less on the tractor working ground.

“There are many benefits to no-till, like soil health,” Krshka says. “Soil health — I just eat that up. I understand it. It just makes sense to me, and I can see it.”

As with any new method, though, there is always a learning curve. Luckily, Krshka, a self-confessed lifetime learner, has found a great resource in Noble Research Institute. 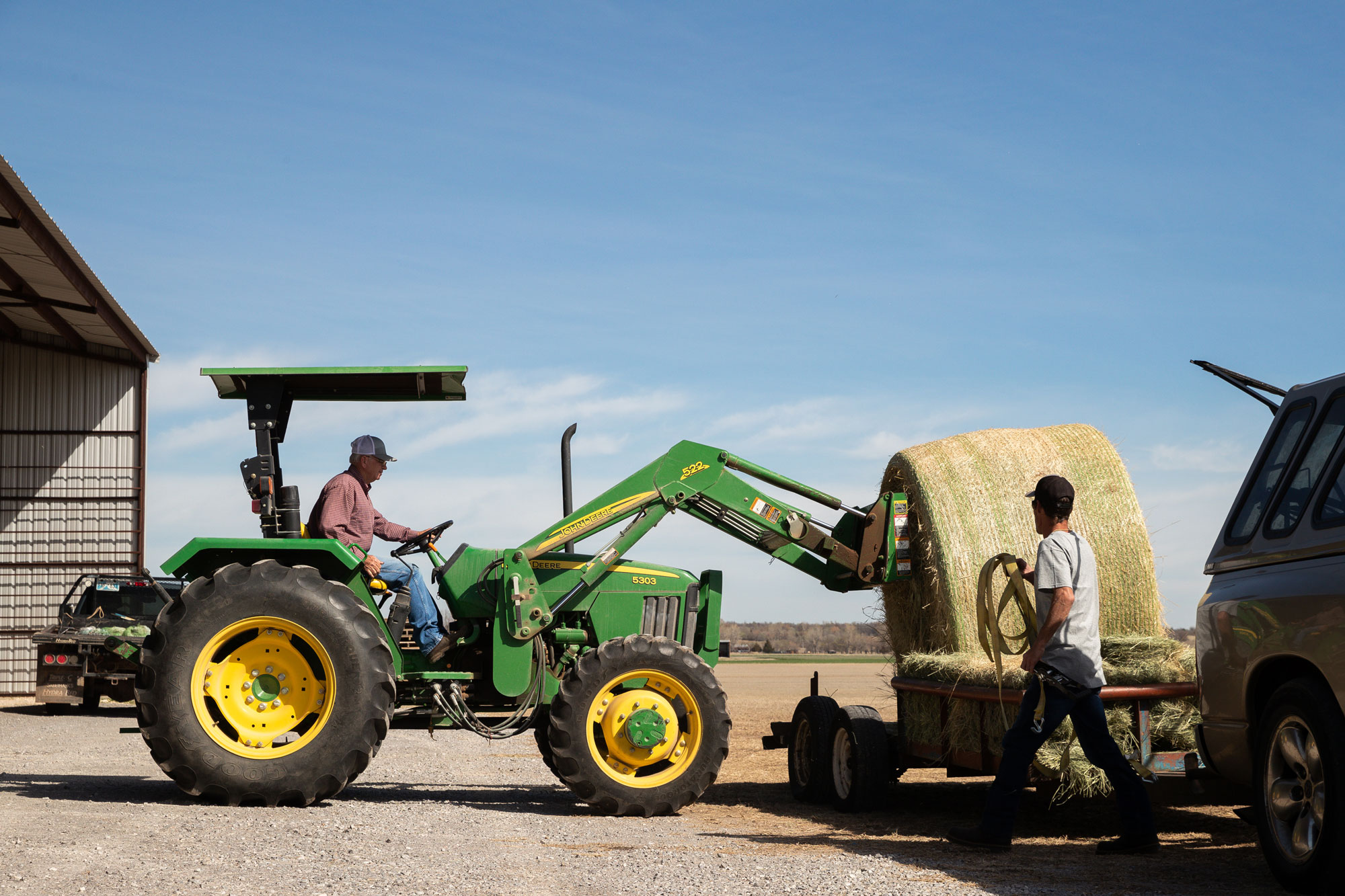 Tom Krshka sells hay produced from his no-till fields near Yukon, Oklahoma, drawing customers from around the region.

Before using Noble to help him get started with no-till, he tried new grass varieties the organization’s plant breeders had developed, including Red River crabgrass and Midland 99 bermudagrass. Now, he continues to join as many Noble seminars as he can, visiting with speakers, other ranchers and Noble consultants.

Jim Johnson, a senior soils and crops consultant at Noble, has been an invaluable resource to Krshka throughout his journey, he says. The two met at a field day a couple years ago. After talking on the phone several times, Johnson made his first visit to Krshka’s place in August 2019.

“I went to a seminar a few years ago about cover crops, and Jim was the head guy,” Krshka recalls. “He just walked through the field without a book, notes or a tablet — nothing. He is hands-on. That is why I connect with him.”

Krshka respects Johnson’s applied approach in the field and in his research. Johnson isn’t afraid to get his hands dirty and knows forages because he walks through them, grows them and studies them.

Last year, Krshka leaned heavily on Johnson’s expertise as the unusually wet spring kept Krshka out of the field and unable to plant the cover crop he’d used successfully for the last couple of years.

Due to the inclement weather last spring, Krshka was facing an 80-acre field overgrown with marestail between 3 and 5 feet tall. That field needed to be planted with wheat to serve as pasture for his cattle, so the success of his wheat stand was imperative to Krshka’s bottom line.

Johnson advised Krshka to no-till his wheat directly into the standing residue of the marestail after burning the weeds down with herbicide. So that was exactly what Krshka did, and he was pleasantly surprised when the wheat was successful.

“Helping farmers and ranchers, like Krshka, is a core component of Lloyd Noble’s vision for stronger, healthier and more sustainable communities.”

Krshka has a record of every bale of hay he has produced since he purchased the land from his family more than two decades ago. He says many of these records have been influenced by what he has learned from Noble Research Institute.

Looking through his records, Krshka can see how Noble Research Institute’s research from the lab to the field provides answers for producers like him.

“I couldn’t have done it (the no-tilling) without their guidance,” Krshka says. “I stuck with it and tried it. There are so many benefits to no-till, and it just makes sense to me.” 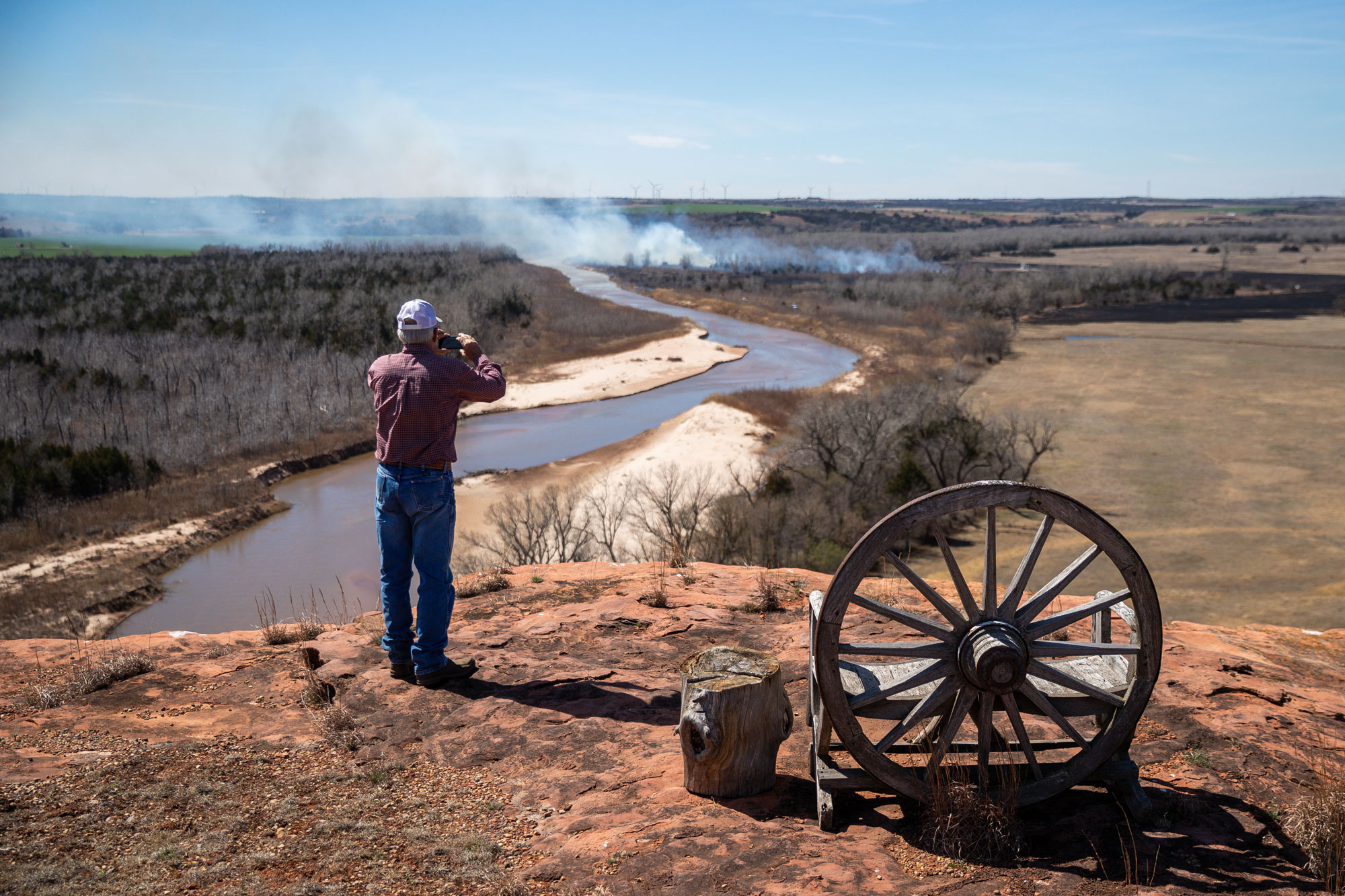 Tom Krshka takes a moment to photograph a wildfire, which scorched the far corner of a friend’s ranch in Calumet, Oklahoma, on March 12, 2020.

Krshka recalls reading in the Noble News and Views newsletter a few years ago where a now-retired consultant from the organization mentioned the biggest pushback he heard from producers: “It may work for you, but it won’t work for me.”

Ironically, Krshka says he has a few good friends who say the same thing to him when they talk tillage and forage management techniques.

He knows these techniques work for him because of his experiences guided by the agricultural research conducted by Noble.

Producers can find new solutions by visiting noble.org, where they can learn more about soil testing, fertilizer recommendations, educational events, subscribe to the newsletter and more. Each of these solutions is intended to support farmers, ranchers and other land stewards as they make decisions that benefit the land — and ultimately society — in the long-term through improved soil health, air and water quality, and wildlife habitat.

“I wouldn’t even consider going back to conventional farming,” Krshka says. “Keep an open mind and listen to what they say. Noble Research Institute has studied it, applied it and done their research.” 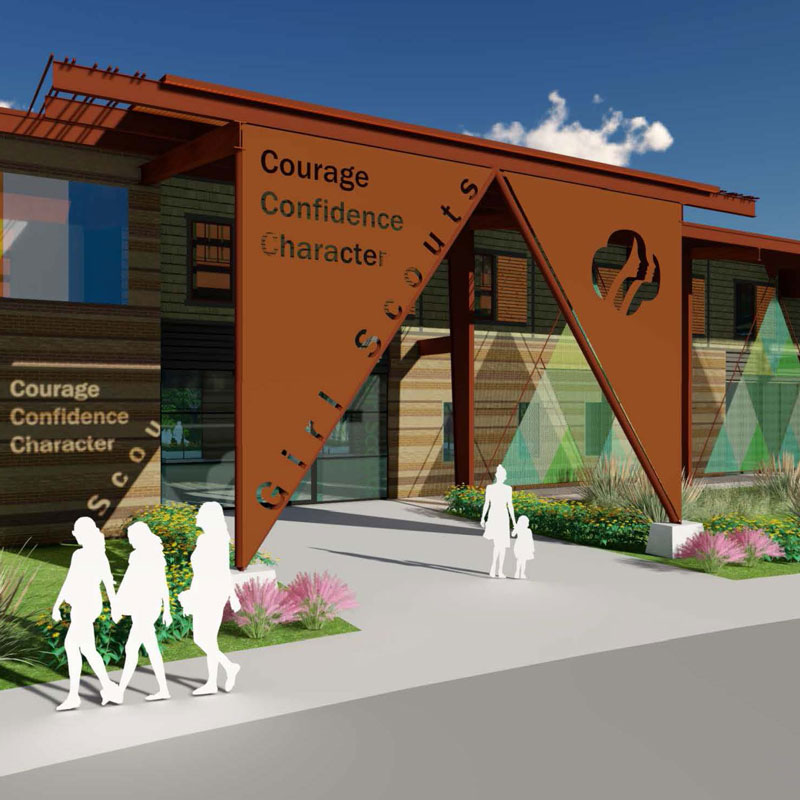 Next Article from the 2019 Noble Foundation Annual Report