Less than an hour after having his right knee replaced, Billy Simon was wheeled into a room on the fifth floor of the new Mercy Memorial Patient Tower. The 62-year-old patient had spent his fair share of time in the old patient tower as an employee. After a career in the Air Force, the Durant native served 13 years as a licensed practical nurse, even working part-time with the orthopedic group now tending to his knee.

On this day, his eyes darted around his private room, taking in all the details, before settling on a red splash of color. A single rose had been placed on the bedside table by his surgeon with a handwritten note wishing him a speedy recovery. The gesture moved Simon and his wife. "That was pretty special," he said. "It started off my stay on a good note. I've never been given a rose in my life. It made me believe my surgeon and the staff cared."

Hospital President Mindy Burdick knows gestures like Simon's rose are not a result of a new facility - compassionate touches have always been a part of Mercy's ethos. However, the new facility has received universal praise as one of the best in Oklahoma, and patient satisfaction has hit the highest mark in a decade.

On a sunny afternoon six months after the grand opening, Burdick sat in the Women's Center Waiting Area on the first floor. Sun streamed through the southern bank of windows, and the room was empty save for a single expectant father who was curled up on a row of chairs. Surrounded by empty bottles of soda, the young man had given way to his exhaustion and snoozed quietly. Burdick flashed him a smile. "That's exactly who this facility is for - anyone and everyone who needs comfort. We could have limped along in the old bed tower," she said. "But that's not the level of care that Mercy wants to provide, and it's not what this community needed or deserved."

The Noble Foundation's Board of Trustees agreed. In 2006, the Noble Foundation pledged $7.5 million to the project, roughly one-third of the $22 million in community support needed to jumpstart the $62 million project (the remaining $40 million was provided by the Sisters of Mercy Health System). 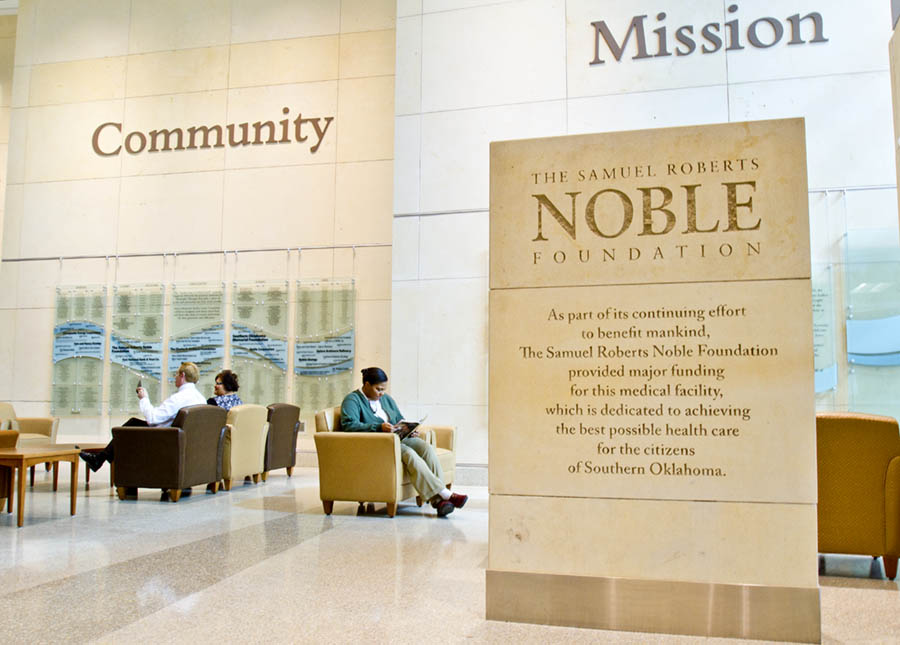 The five-story Mercy Memorial Patient Tower in Ardmore, Okla., opened during summer 2010. The hospital expansion was funded in part by a $7.5 million Noble Foundation grant.

"There is nothing more fundamental to the vitality of a community than its medical care," said Mary Kate Wilson, director of granting for the Noble Foundation. "The Board of Trustees was eager to support this effort. This one project will impact thousands of lives each year and better this region in a substantial way."

The five-story, 180,000-square-foot tower opened in summer 2010, boasting 158 rooms (all private) as well as new intensive care and pediatrics units, a joint replacement center and a women's center. "The bricks and mortar are absolutely beautiful, but the best part is how every nuance of the new tower is built around the concept of being patient- and family-centered," said Burdick as she led a tour through the facility. Key to the design are many details - everything from the warm hues of paint to the floral artwork - aimed at making the new hospital tower feel less like a hospital.

Waiting for an elevator, Burdick explained how the building was designed to protect patient privacy. Visitors take separate elevators and flow down their own set of hallways, called "the front staging area" - a term borrowed from Disney theme parks - while patients and staff travel down separate "backstage" corridors. "Patients often feel vulnerable after a procedure. They certainly only want to see their family and friends," Burdick said. "We want to protect them as much as we can."

Once on the fifth floor, Burdick entered one of the private rooms (which are larger than the old tower's shared rooms) and detailed the amenities. Tuscan art slides away to reveal IV pumps and oxygen nozzles; couches fold out into beds for family members; and large posters provide clear directions for the resident.

The changes, however, extend far beyond convenient design and artwork. The new tower offered the Mercy staff an opportunity to implement a revamped model of distributing nurses. Gone are crowded nurses' stations at the end of the hall that left patients far from support personnel. Decentralized stations locate a few nurses within steps of the six rooms under their care, meaning more one-on-one attention. "Patients seem much more at ease knowing I'm right outside their door," said Cristi Cole, RN. "They feel connected, and I believe that helps them relax and recover."

A new phone system increases the nurse-patient connectivity as well. Traditional protocol had patients buzz the nursing station. Now, nurses carry mobile devices that allow constant access. Of course, technology like the phones plays a significant role in the new tower. More than 500 computers support the hospital's new electronic patient records system (known as EPIC) that went live when the tower welcomed its first patients. EPIC provides the staff a single and comprehensive medical record for each patient. Everyone works from the same virtual chart with the same information. Less paperwork means less opportunity for mistakes. 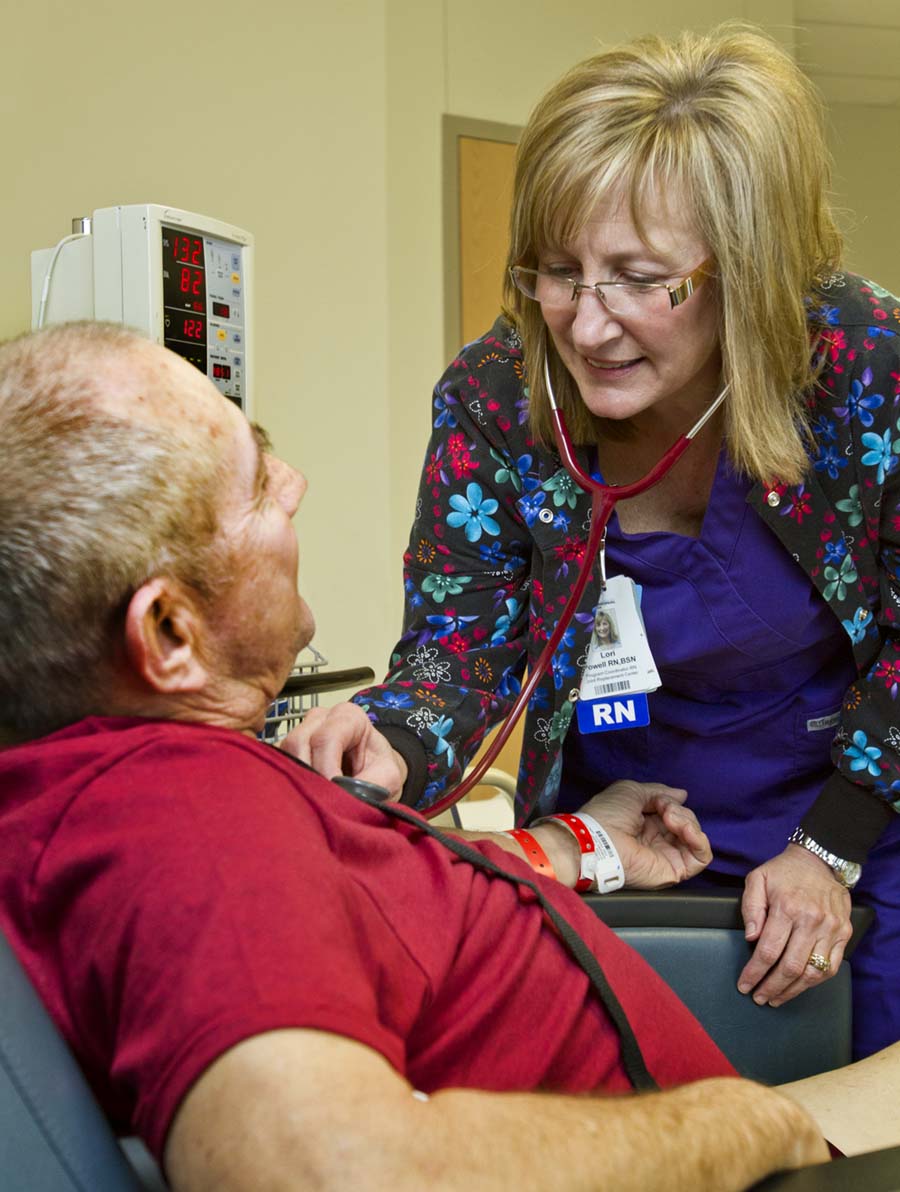 Each room is equipped with a computer so doctors and nurses can update charts and order tests from the patient's bedside instead of carrying the information down the hall to be recorded on paper. This trip, Cole explained, often resulted in numerous distractions that slowed down charting. The installation of EPIC also makes Mercy one of only 3 percent of hospitals nationwide to have an integrated electronic health records system that provides real-time, paperless access to patient information. Still, the technology only accents the human element that patients like Simon experience.

After his four-day recovery, Simon offered high praise for the facility and staff. "Beyond staying in the largest private room I've ever seen in a hospital, the entire staff treated me and my wife with respect," he said. "They were careful to guard your dignity. They were truly remarkable."

Simon specifically recalled one of his initial physical therapy sessions. "The therapist said, 'Today we're going to go fishing at the Red River.'" Simon looked down the hall and at the end was a red bucket. Once he had traversed the length of the hall, the physical therapist gave Simon a claw-grabber, which he used to snag a bag of Goldfish crackers from the bucket. "It was a cute and funny exercise," Simon said. "It made me relax. I appreciated the effort and creativity someone put into setting that up."

For Burdick, stories like Simon's are confirmation that her staff and the new tower are offering their best to the community. "I wish that no one ever had to use our services," she said, "but I want them to have confidence that we deliver superior care here with the express goal of getting them well."