To Learn, Return and Serve 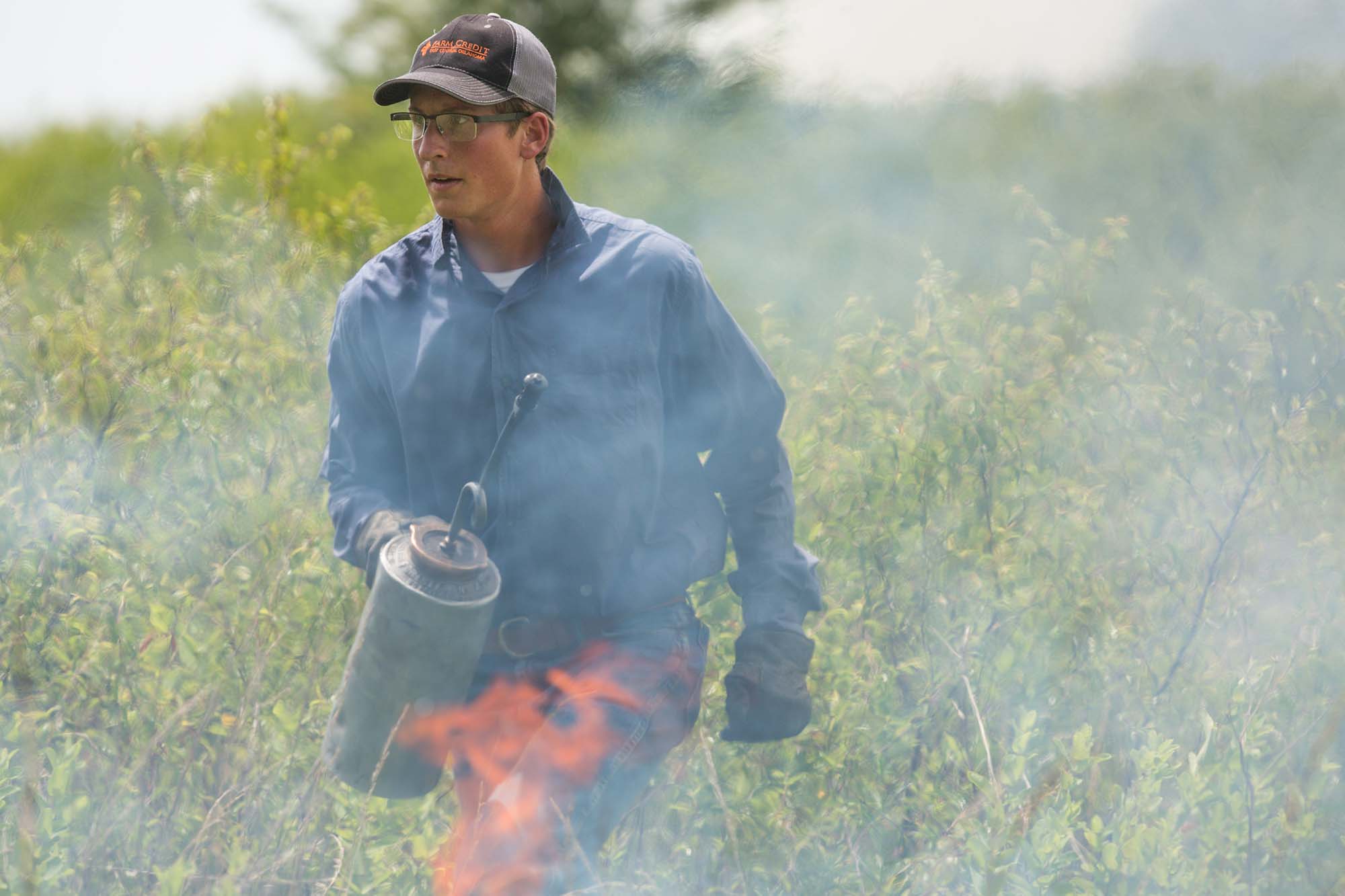 Seth Coffey, a Sam Noble Scholarship recipient, assists with a prescribed burn. He plans to use his educational experiences to benefit his family's ranch in southern Oklahoma.

Drought reigned the summer of 2011, and Seth Coffey was home after finishing his freshman year at Oklahoma State University.

He spent nearly every afternoon pumping water for cattle that summer. He'd work from 6 a.m. to 2 p.m. in the oil fields about 30 minutes away from his family's ranch in the Arbuckle Mountains of south-central Oklahoma. Then he'd come home, take an hour-long nap and head back outside.

Many times Coffey observed the landscape around him. Some grasses withered in the dry ground leaving others to take the brunt end of the cattle's constant food seeking, or foraging. He saw the classic symptoms of overutilization: stressed and dying plants, which led to limited grazing sources for the cattle and other problems like bare ground, which can lead to erosion.

"That summer showed me how important it is to manage land correctly," said Coffey, a sixth generation rancher. "Not that we were doing it incorrectly. The cows had to have water, and those were the only two pastures with working wells. But I distinctly remember thinking, 'I never want to see this pasture like this again.'"

During his junior year, the agribusiness student added a second major: rangeland ecology and management. The following fall, he took an elective fire ecology class taught by John Weir, an OSU research associate known for his work with prescribed burns. He took another in the spring.

"We see a lot of eastern redcedar trees around the Arbuckles," Coffey said. "When I learned about prescribed fire and its benefits to the land, including managing cedar, I knew this could be my way of giving back to my community when I return to the ranch."

In February 2015, he helped with his first prescribed fire. He was in charge of using a leaf blower to prevent smoldering debris from escaping the burn unit. He'd go on to help with as many more burns as his schedule would allow. He even opted out of a spring break trip to Florida with friends so he could go home to help his family conduct their first prescribed burn.

As Coffey's final undergraduate semester approached, Weir asked if he would be interested in pursuing a master's degree in fire ecology. He said yes, applied and is now advised by Professor Samuel Fuhlendorf, Ph.D., and Weir in the program.

"The scholarship has helped me financially, of course," he said. "It's also helped me learn how to be successful because I'm paying attention to my GPA and treating college as my job. If you learn to treat your education as your job, you can find different ways to apply your educational opportunities to your career."

He remembers reading the story of Lloyd Noble when reapplying for the scholarship. He connected with Noble's desire to do something to help when he saw the Dust Bowl's effects on the land.

"That's kind of how I felt when I saw the problems from the drought in 2011," Coffey said. "I see my duty as getting my education in fire ecology and bringing that knowledge back to the ranch and community. It'd be a good way of passing on that legacy." 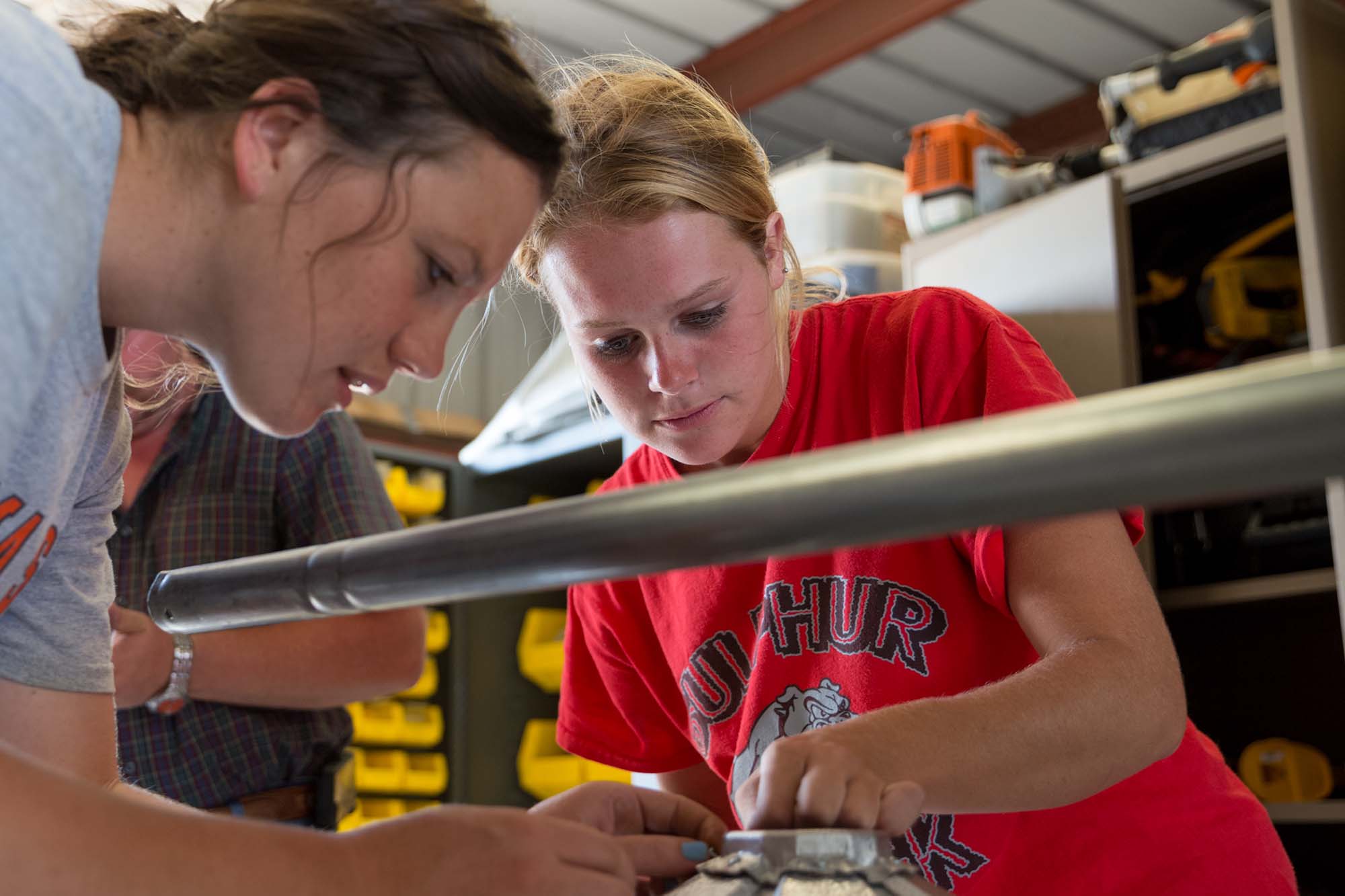 Samantha Howe (right), a Sam Noble Scholarship recipient, helps build a birdhouse as part of her summer internship with Noble Research Institute in 2016. She is interested in animal genetic research.

Samantha Howe stood in front of a panel of judges at the 4-H Horse Field Day speech contest held at Oklahoma State University (OSU) in 2010.

She was in seventh grade at the time and had just learned that her speech on the genetics of horse color had won first place. She would go on to compete and earn fourth place at the national level in North Carolina.

"I had researched all the information for that speech and found it so cool," Howe said six years later. "I couldn't get enough."

She continued to read articles about human and animal genetics. And, in high school, she savored her biology teacher's lessons on the topic. Now she's studying animal science at OSU with an emphasis in animal biotechnology. "I've been interested in going into agriculture as long as I can remember," said Howe, who grew up on a commercial Black Angus ranch between Sulphur and Dickson, Oklahoma. "It's always been science that has clicked in my mind, so that's what I want to pursue."

She is particularly interested in beef genetics, the study of hereditary traits in cattle.

In the mid-1700s, an English cattle and sheep farmer, Robert Bakewell, became the first to improve his herds through a genetic approach. He strayed from the day's standard practice by separating male and female livestock. Then he intentionally selected mating pairs based on desirable physical characteristics, such as size and ability to convert grass to muscle. Hundreds of years later, cattlemen and women continue to use his method of selective breeding to enhance desirable traits in their herds. Over time, they've developed polled, or hornless, bloodlines within horned breeds of cattle and black-colored bloodlines in historically red-colored breeds (such as Simmental and Limousin). Cattle producers also select for traits beneficial to their animals' health and well-being as well as to match consumer preference for marbling, leanness and other meat quality traits.

The study of beef genetics also makes cattle producers (particularly those who raise purebred cattle) aware of rare, recessive diseases, such as neuropathic hydrocephalus. With this genetic information, cattle breeders know how to avoid breeding carriers and evade the emotional and economical heartache caused when a calf is born with the recessive disease.

"I've seen how those defects affect the cattle and our ability to make a living and produce beef," Howe said. "It's interesting to me that it may be just one gene that causes the problem, that one little thing can so significantly affect a whole animal."

The science-seeker was familiar with Noble Research Institute, which is largely funded by The Samuel Roberts Noble Foundation, before she decided to pursue a career studying cattle genes and finding ways to help producers improve their herds. Her father has asked questions of the agricultural consultants from time to time, and she visited the facility during middle school field trips. A close family friend who previously received the Sam Noble Scholarship encouraged Howe to apply, which she did in 2015.

"Receiving this scholarship means so much to me," Howe said. "Because of it, I don't have to worry about loans, and I can focus on classes and leadership activities."

She also hopes to focus on work in an animal genetics laboratory as an undergraduate student at OSU soon. "My life goal is to go into animal genetic research," she said. "Having a prominent agricultural research institution's support means a great deal to me."