More Space for Sunshine and Smiles

A new building enables the Sunshine Industries Adult Day Services program to grow, thanks in part to the Noble Foundation.

A crafter's dream lay strewn across a long table with four people on either side.

Some worked studiously, carefully balancing an Elmer's glue stick in one hand while sticking shiny plastic pieces onto the paper with the other. Others flaunted finished masterpieces. Their excited laughter brought joy to the faces of the Sunshine Industries Adult Day Services (ADS) staff members who helped and joked with them.

Amber Christensen's eyes lit up as Alex Hartdegen, the ADS intern, tied around his head the pair of colorful glasses he made. Christensen wore hers like a headband and placed a final feather on her second set after laughing at Hartdegen holding his artwork to his face. 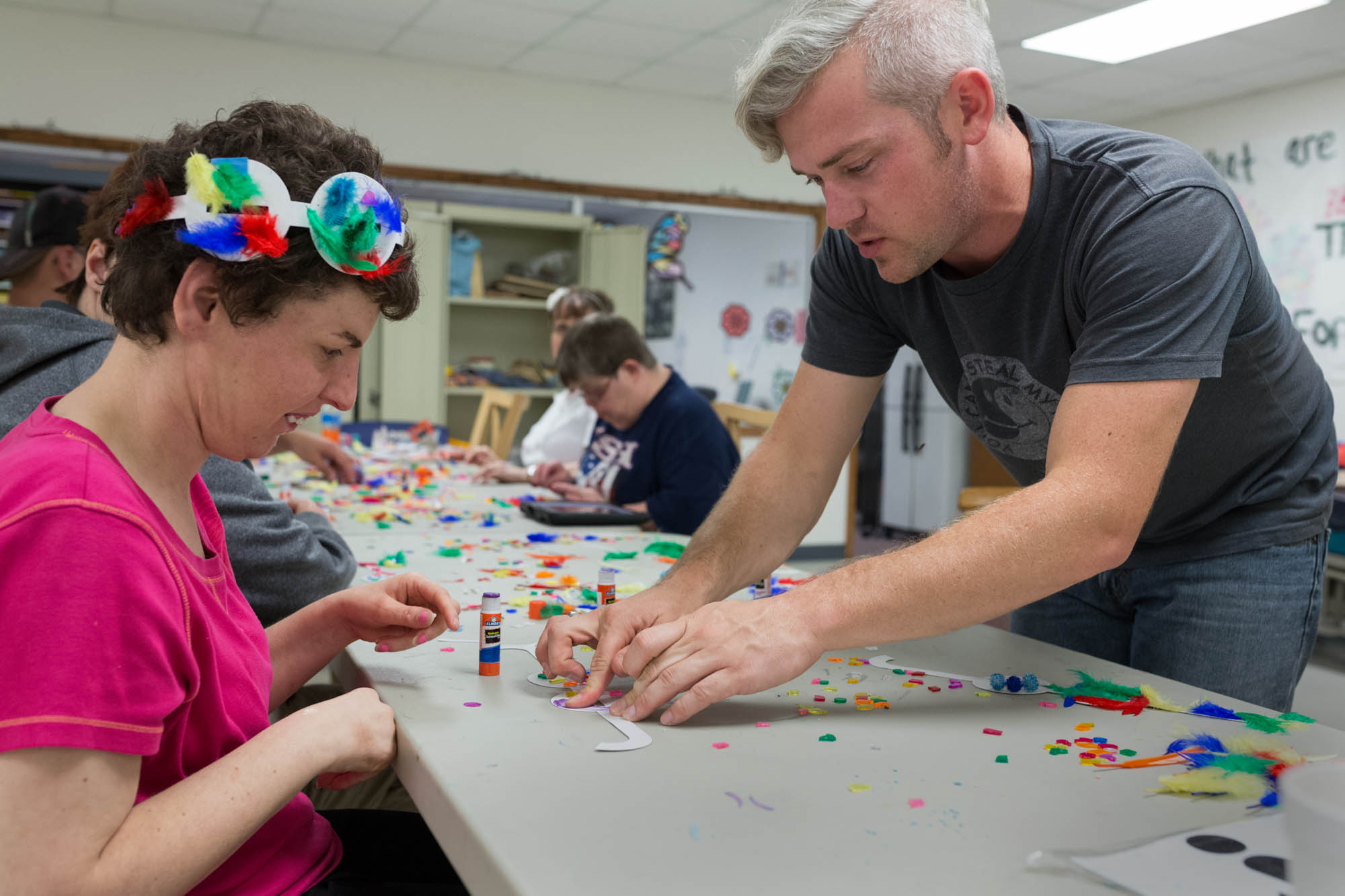 "So pretty, Amber!" called out Meredith Howard, program manager, from the other side of the room.

The room makes up the majority of the 5,000-square-foot metal building. Program director Tammie Long's office is around the corner in a storage room that triples as a conference room. A final, narrow space on the opposite side doubles as an office for the remaining five staff members and a quiet space for clients to rest in recliners after lunch.

"It's a nice building," Long said. "It works well for us now, but we just don't have the space to accommodate all the need."

Their client waiting list is growing, but soon their wait will be over. With the community's support, including a $200,000 gift from the Noble Foundation, ADS is building a new facility. 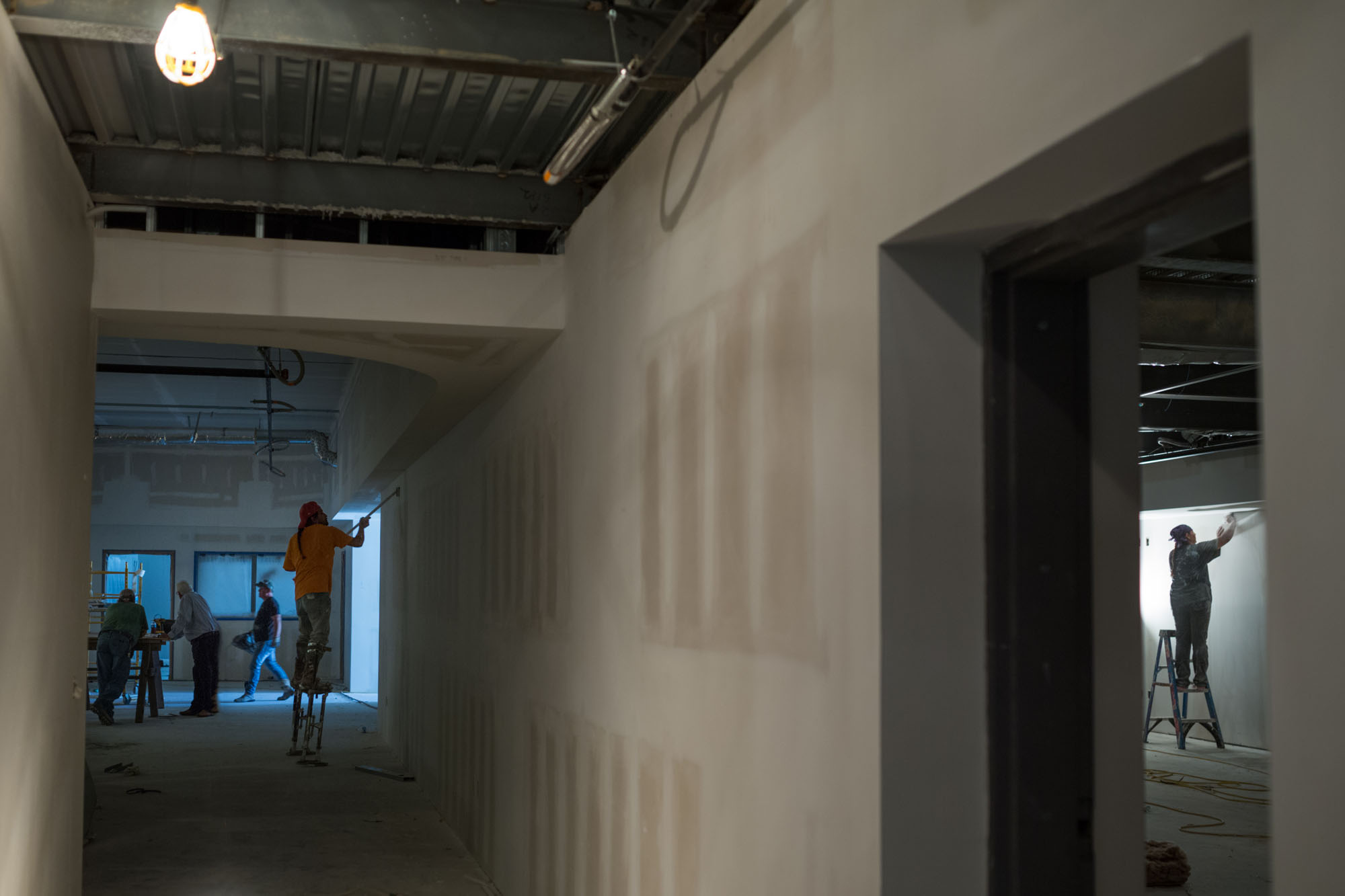 Tammie Long was a music therapy major at the University of Iowa when she and a friend, who studied special education, spent a summer working at a camp for people with cerebral palsy. Thirty years later, she still remembers it as the time of her life.

Long moved to southern Oklahoma in 1990. She began looking for a job where she could continue working with people with developmental disabilities and soon found Sunshine Industries. The Ardmore-based nonprofit agency was established in 1969 by parents who wanted a place that could assist their adult children with developmental disabilities live as independently as possible.

Sunshine Industries works with community businesses to provide jobs for those with disabilities. Some earn their own income by inflating blow-up balls for Dollar General, packaging gloves and making pens in a sheltered workshop environment. The workshop is where Long, like most Sunshine employees, started working in August 1990. Other clients work in Sunshine-owned thrift stores or at local restaurants and other businesses. Sunshine also offers residential services, but it did not offer adult day services at the time Long joined the agency.

"Sunshine Industries is a respected and worthy organization, as evidenced by the long-term support of the Board of Trustees. They are one of our most impactful grant recipients, in terms of their service to people with developmental disabilities, and a great asset to our community." — Mary Kate Wilson

Long and her supervisor, Lorene Johnson, who is celebrating 37 years of working at Sunshine this year, saw the need. "We kept thinking, there's got to be something for the people who have reached retirement age or are unable to work," Long said.

The Sunshine Board of Directors saw the need, too. Other area agencies offer day services for the aging, but Sunshine has a unique ability to provide specialized care for those with developmental disabilities as they become older or experience severe problems.

In 1999, Long drafted a business plan for a day services program while pursuing her bachelor's degree from East Central University. In 2008, the idea became reality. Long and one other staff member opened the doors of what used to be the VFW Bingo Hall to eight individuals.

And then, in 2012, the announcement came that a residential care facility for adults with severe developmental disabilities in Pauls Valley, Oklahoma, would close. The facility completely shut its doors in the summer of 2015.

"Suddenly, all those people needed services," Walker continued. "We knew we were going to have to grow." 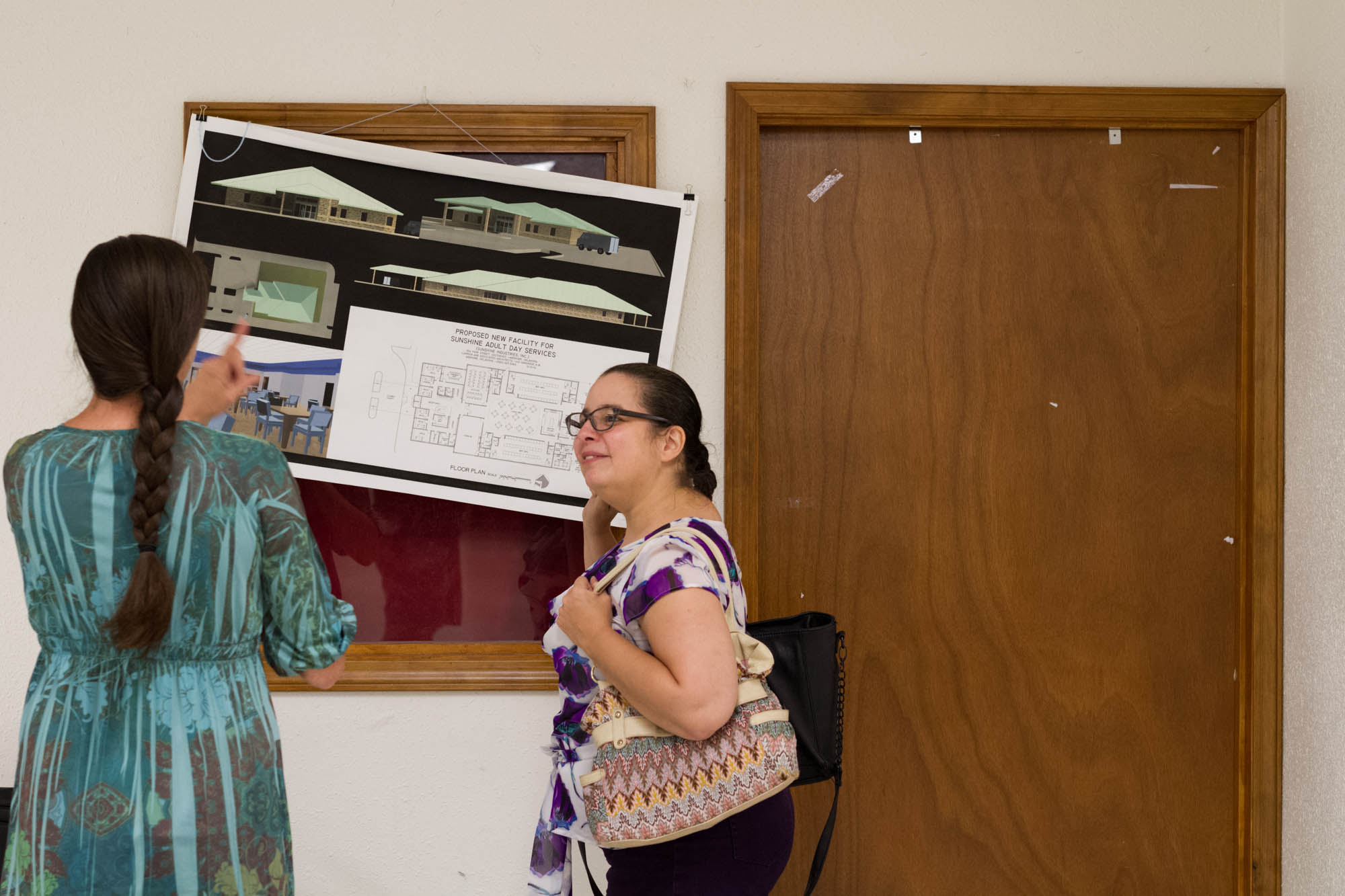 The new 17,000-square-foot Sunshine Adult Day Services building will nearly triple the number of people the program can serve.

The Sunshine Industries Board of Directors approved plans for the construction of a $4 million facility in 2012. Up to half of the funds could come from the agency's endowment, and the rest would depend on the community.

The staff held a golf fundraiser. Parents raised money. And community foundations, including the Noble Foundation, contributed. The Noble Foundation's 2014 grant is part of its long history of support for Sunshine that dates back to the agency's beginnings: 16 grants totaling $788,560.

"Sunshine Industries is a respected and worthy organization, as evidenced by the long-term support of our Board of Trustees," said Mary Kate Wilson, director of philanthropy, engagement and project management. "They are one of our most impactful grant recipients, in terms of their service to people with developmental disabilities, and a great asset to our community."

The concrete foundation was poured in December 2015. Walls went up this February, and the stonework was completed in July. In late August, Long walked into the building after chatting with local architect Bill Lumpkin. The floor was dusty and the duct work still exposed, but Long could envision where everything would be, from the "dancing room" to the "wheelchair parking lot."

"I almost need a Segway to get around here," Long joked, moving from room to room.

The new building adds 12,000 square feet of space and almost triples the number of people they can serve from 36 to 96. They already have 20 people expressing interest in services, including one woman whose hospital bed will be delivered to the site soon. At the current facility, Long can only accept two clients who need a hospital bed because of space constraints. Now that won't be a worry.

Instead of one large room, there are multiple activity rooms. Two have 12-inch concrete walls and reinforced hallways so that clients can easily watch movies or play games during a storm. There's a large commercial kitchen and cafeteria, where their annual Halloween and Valentine's Day dances will take place. A back porch for clients provides space to sit and enjoy the sunshine or walk on a trail within the fenced backyard. There are also offices, a conference room, a staff break room, and a feature Long gets excited about: windows, 21 to be exact.

"But it would only take one to be more than what we have now," Long laughed.

If all goes as planned, the building will be finished later this fall.

"We are all so excited," Long said. "There are so many things about this new building that will help us better serve our clients, and we'll do anything for them. We're also going to be able to take in more people. The need has grown, and this is the only way we could meet it."