Tom Umstead started Mr. Tom’s Heart, which links people in need with people and companies who have resources.

A Force For Good

“I’m too old to be dangerous,” Tom Umstead laughs.

Underestimating this 86-year-old would be your first mistake. It’s only 5 a.m., but “Mr. Tom” has been awake for hours picking up food donations from big box stores, delivering bouquets of lilies to every nurse on staff at Children’s Healthcare Atlanta, passing out hugs to family members in the pediatric wing, and greeting dozens of friends and fans alike. 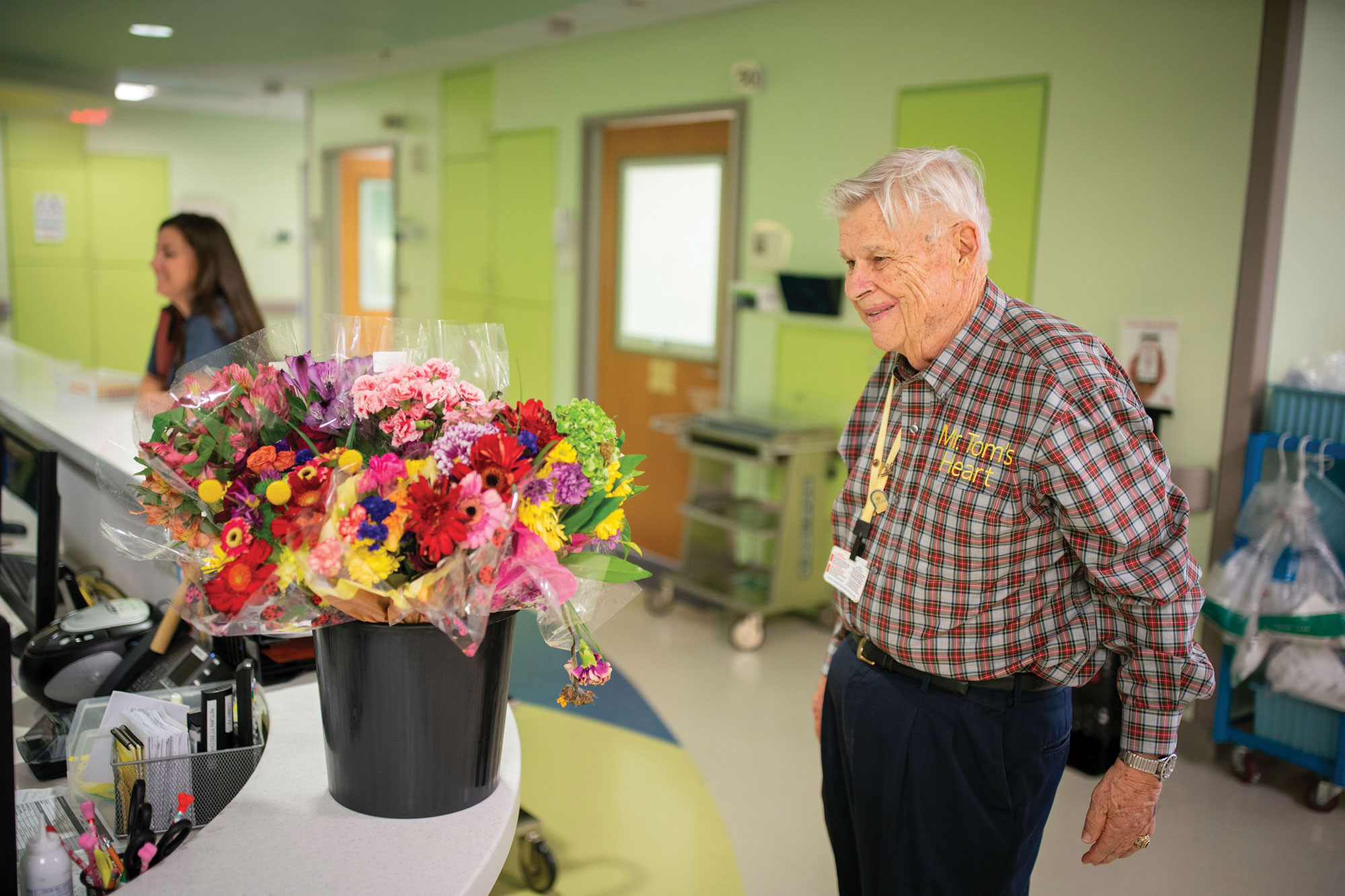 Tom Umstead delivers flowers and other goods to Scottish Rite hospital in Atlanta.

For someone who spends every day in a hospital, Mr. Tom is full of joy and humor. He’s dangerous only to apathy and the idea that little efforts can’t make a big difference.

Tom Umstead is a force for good.

It’s the most rewarding experience you can get to help people who need help. And I don’t know a soul in a hospital who does not need help.” Tom Umstead, founder of Mr. Tom’s Heart

“The first time I ever went to a hospital was during the polio epidemic in 1952,” Umstead remembers. He was a freshman football player at Georgia Tech playing a game for charity. He didn’t think of hospitals, volunteering or fundraising for the next 40 years. That all changed on a regular day in retirement, during an errand to the local Publix.

While picking out a loaf of bread, Umstead noticed the store throwing out day-old items. Umstead offered to pick up and deliver goods to local charities. Food donation presents legal and logistical challenges, but Umstead was determined to connect surplus items with those who needed them most. Mr. Tom’s Heart was born. 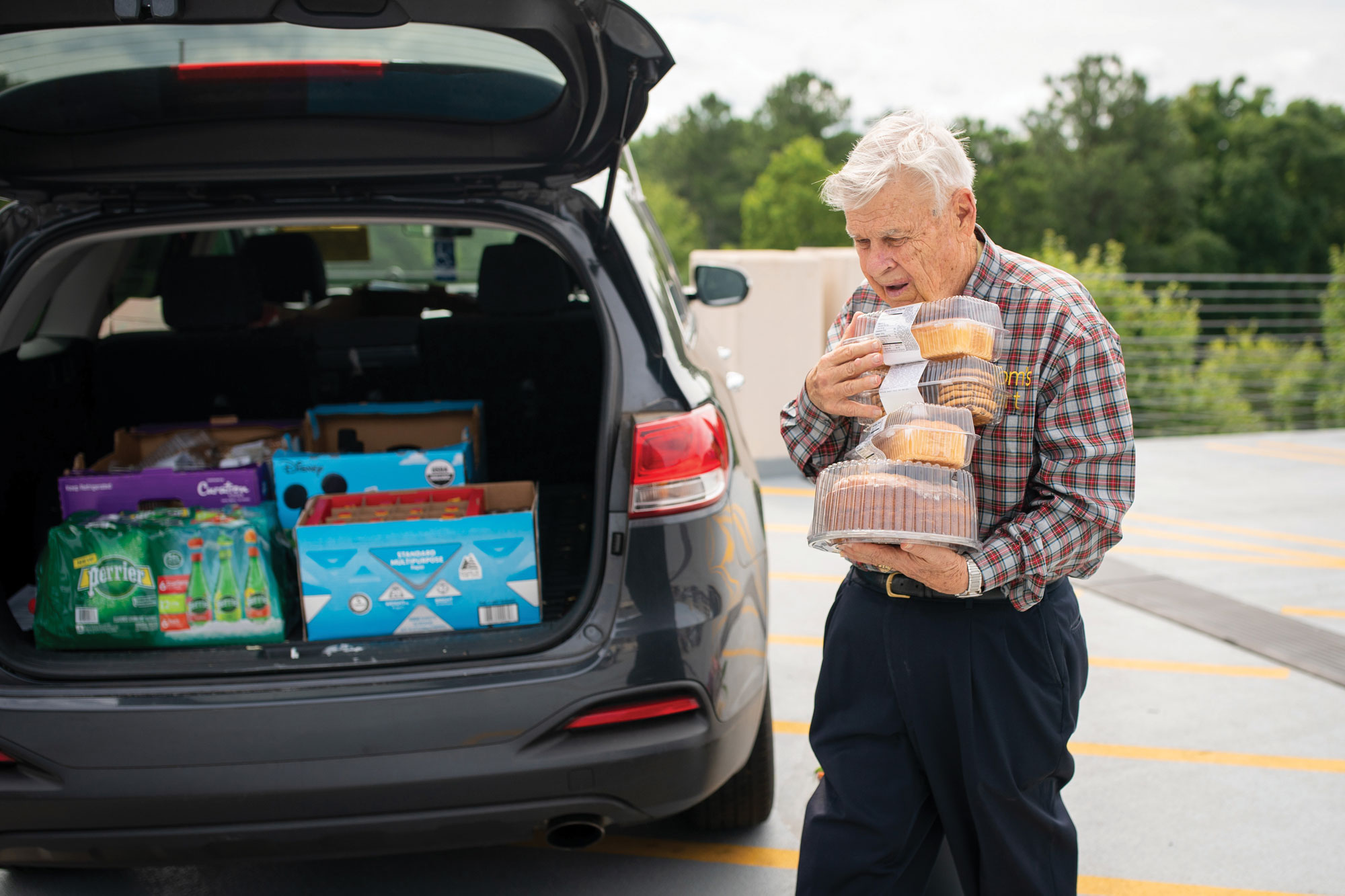 Mr. Tom’s Heart is run entirely by volunteers, who deliver food and other goods to numerous organizations, including those that serve sick children and adults, lonely seniors, and homeless children and moms.

Today, Mr. Tom’s Heart accepts donations seven days a week from brands like Publix, Costco and Trader Joes. His food pickups provide for Ronald McDonald House and The Zone, both special wings within Children’s Healthcare Atlanta. As families travel and spend extended time in treatment, often separated from one another and relying on shelters for food and housing, a free meal and genuine connection can make all the difference.

“It’s the most rewarding experience you can get to help people who need help,” Umstead says, “And I don’t know a soul in a hospital who does not need help.”

Umstead says his spiritual gift is helping bring joy to sick kids, but his secret power is persuasion. People can’t turn down his optimism. Mr. Tom’s Heart is run by more than 100 dedicated volunteers. When he’s not recruiting help, he’s generating new ideas for hospital programs and fundraising.

“He’s such a dreamer. He is truly a visionary,” says Juliet Veal, child life supervisor at The Zone. “He sees needs, and he acts on them. If there is a way to do something, he will figure it out, even if it’s challenging. Every time he calls, I know it's going to be something great.”

Mr. Tom’s Heart allows The Zone to provide programming it otherwise could not afford, says Veal. Existing programs were already stretched when Umstead called her up wanting to expand upon The Zone’s new prom. 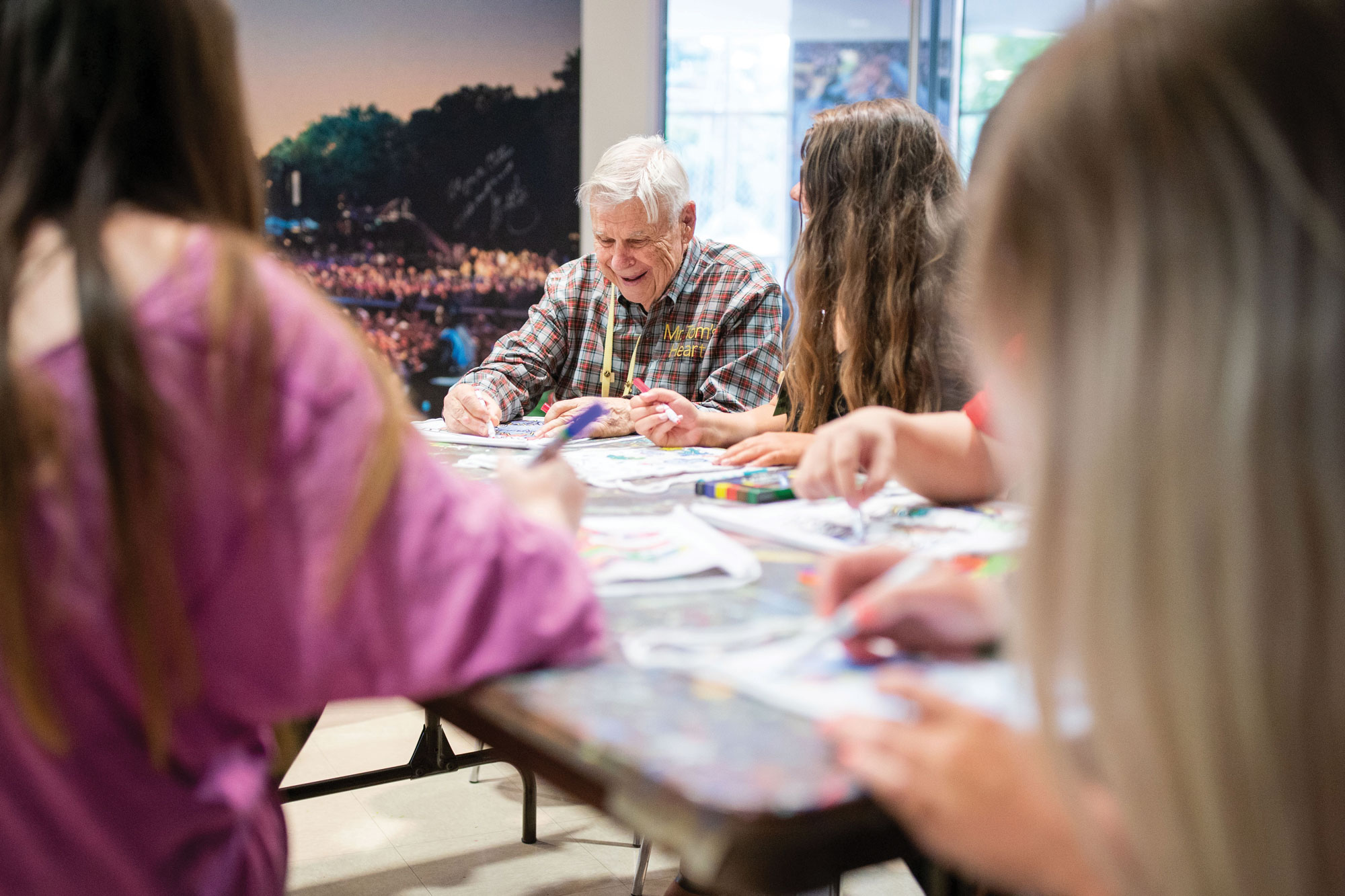 Mr. Tom’s Heart envisioned The Zone as an impressive event venue. Umstead wanted to give patients not just a night of dancing but the entire prom experience. He needed enough funding to host current and past patients who missed out on the milestone due to illness, and he wanted to outfit everyone attending with corsages, boutonnieres, dresses, suits and style.

The Samuel Roberts Noble Foundation awarded $6,000 to Mr. Tom’s Heart in support. A portion of the grant helped girls receiving chemo at Scottish Rite Children’s Hospital in Atlanta, Georgia, prepare for the prom with makeup, hair and salon services.

“We were able to transform a hospital into this magical place,” remembers Lee Smith, Umstead’s daughter. “The kids forget that they’re sick or different or in a wheelchair. Everyone gets to feel fabulous.”

Almost 70 kids enjoy the now-annual prom. Veal says The Zone prom is better than any high school event, with an enormous attention to detail. Kids feel like they get a real prom, not a second-hand experience due to sickness. 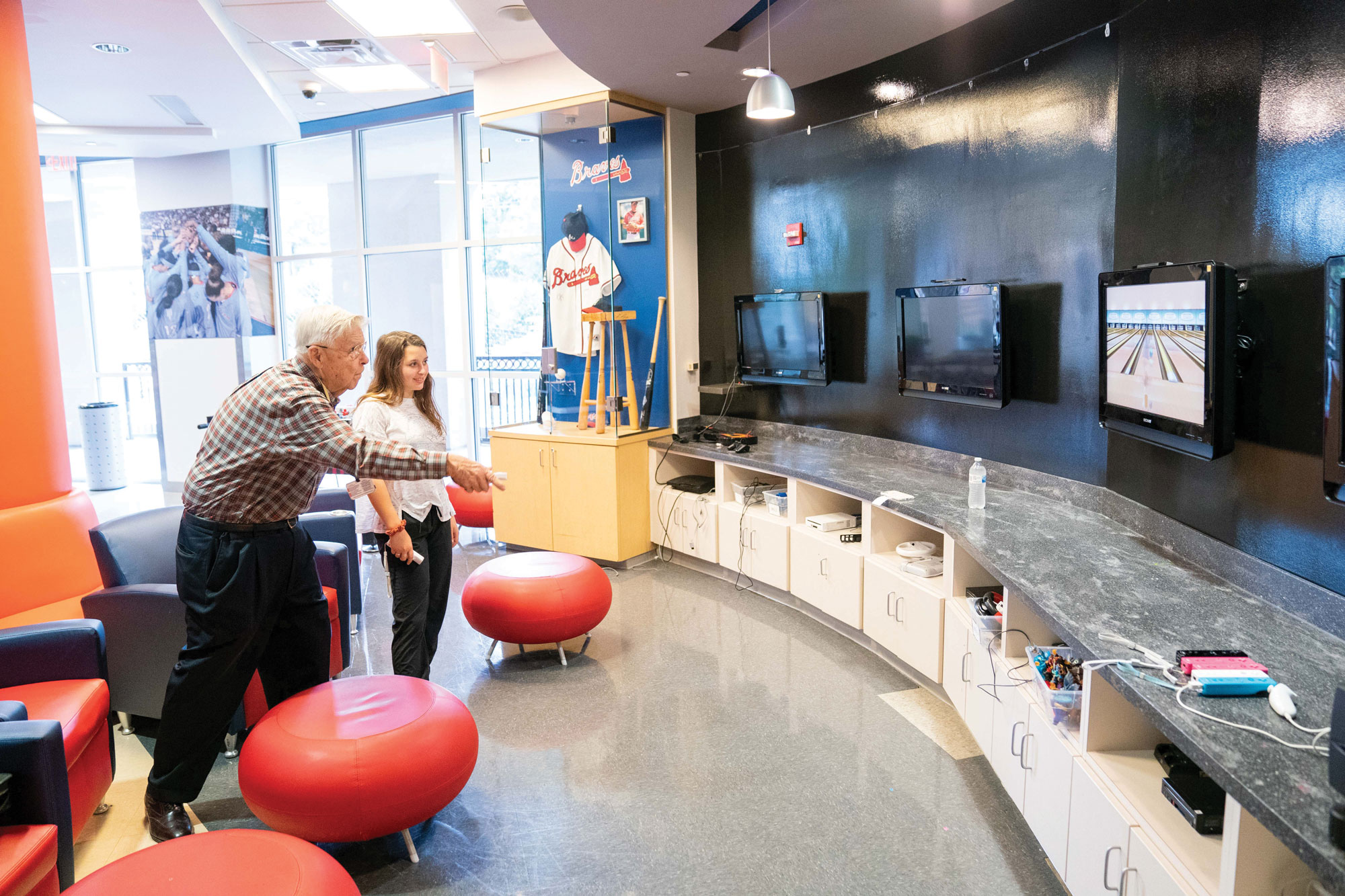 Tom Umstead plays Wii bowling at Scottish Rite hospital in Atlanta. The hospital is one of several organizations Mr. Tom’s Heart supports through time and donations.

“Without Mr. Tom, we wouldn’t be able to have prom. He’s like a guardian angel,” Veal says. “I wish every organization had someone who backs them so much and believes in them so much.”

It was Ed Noble, founder Lloyd Noble’s son, who first inspired Umstead to serve children. The two attended church together before Ed passed away in 2016. While Noble served on the Noble Foundation Board of Directors for more than half a century, he also gave his time and attention to local youth groups.

“Ed Noble was one great human being,” Umstead remembers. “Ed had a gift with children that you would not believe, and my spiritual gift is the same thing. He had a few more dollars than I did. And, hey, with more money, you can do more things.”

Grants from the Noble Foundation support various initiatives, like bringing Atlanta Zoo animals to The Zone and helping broadcast the event to those too sick to participate. Umstead says Noble’s financial support helps him dream bigger and improve events, but it’s Ed’s example that truly shapes the way he serves.

“When I hear someone say ‘You can’t do that,’ I always say, ‘Well you know Ed ... it didn’t faze Ed,’” Umstead laughs. “He had a more important job to do: to serve. His example is humbling to us all.”