As a result of Noble's continued dedication, 75 acres of rippling water near Camp Simpson became known as Lake Sam Noble - a living testament to his impact. There, troop leaders still tell stories about the second generation philanthropist.

A favorite tale recalls the time Sam hosted a group of influential oilmen at the lake and asked for donations to the local council. He received plenty of checks. Some, however, he didn't mind handing back with an arched eyebrow, kindly encouraging the donor to add a zero or two. And they did.

"Mr. Noble had a commitment to serve youth," said Brett Matherly, Scout Executive for BSA-AAC. "His legacy still lives on through our continued interaction with the Noble Foundation."

Today, Noble employees volunteer time and energy, as well as bring their children to participate. However, the relationship with the BSA-AAC extends much further. 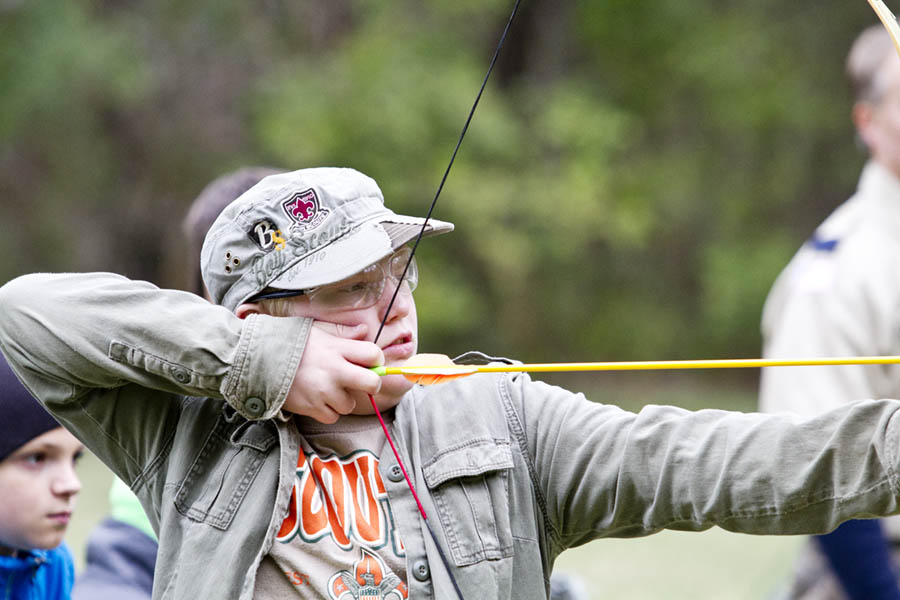 Boy Scout Matt Glaser hones his archery skills under the watchful eye of his scoutmaster.

The Boy Scouts of America organization provides young men from first grade to seniors in high school with programs to develop responsibility, citizenship and character. The organization also offers young men the opportunity to earn merit badges based on acquired knowledge. As more than 20 merit badges are agriculturally related, David Annis, a soils and crops consultant with the Noble Foundation, volunteered to teach a course about soil and water conservation.

"My work with the scouts is directly related to what I do here at Noble," Annis said. "I use information very similar to what I'd give a farmer or rancher. Instead of a scout applying it to a farm, he learns important life lessons about agriculture and works to earn his merit badge."

Annis is an Eagle Scout and now serves on the area council Eagle Board, reviewing scouts' collective accomplishments throughout their scouting advancement. His son is also a scout. He credits his professional success to his time in the organization. "Being a scout teaches you to step up and take charge, developing leadership abilities," Annis said. "When I began work at Noble, I sat down to write my personal mission statement as a consultant. I immediately went back to Scout Law. It defines me as a person and my work." 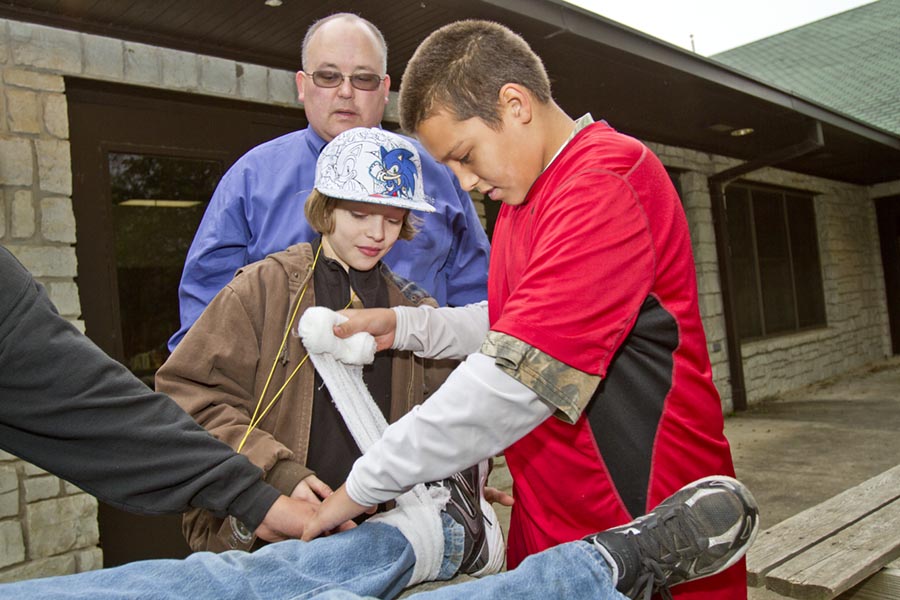 Annis is not alone. Several Noble Foundation employees can be found serving as scout masters, camp volunteers or area council board members. But the bond also includes a working relationship.

Camp Simpson has 12 campsites that host six Boy Scout summer camps with nearly 2,000 campers and staff each year. Through grants, the Noble Foundation helped the camp purchase an additional 1,000 acres - doubling its size - for camping space and resources, allowing room to grow and reach more youth.

The land provides plenty of opportunity for more sites, miles of hiking trails and extensive water sports, but it also requires more management. Several Noble Foundation agricultural consultants assist the BSA-AAC in stewarding their natural resources and achieving safer campgrounds through its consultation program - which is usually focused on agricultural producers, but assists all types of land managers.

The Noble Foundation agricultural consultants have assisted with wildlife habitat, pest control, prescribed burning and brush, timber and water management. Keeping the camp clean and safe for the 3,200 scouts in the BSA-AAC's nine-county service area is a challenge, but both organizations have risen to meet together. "The Noble Foundation has been key in helping us continuously work to utilize Camp Simpson to the best of our ability," Matherly said.

Mike Porter, a wildlife and fisheries consultant with the Noble Foundation, began consultation work with the Boy Scouts in 1988 and now serves on the executive board for the BSA-AAC. Porter has helped plan and conduct the first prescribed burn on Camp Simpson to reduce brush encroachment, such as eastern red cedar, reduce wildfire risk, improve range health and improve wildlife habitat.

"As consultants, we help people and organizations like the Boy Scouts better understand and steward their resources," Porter said. "Improving and maintaining land can be a challenge and a lot of work, but we are here to help people accomplish this in the most efficient and economical manner possible."

Consultants are not only working to improve landscapes, but also futures. Through volunteer leadership and consultation, many Noble employees are also inspiring young men to pursue careers in agriculture. "I think being in Boy Scouts, and in turn being involved with the Noble Foundation, has opened my son's eyes to wildlife management as a career choice," said Teresa Meyers, mother and volunteer with Troop 5. Her son, Ethan, has pursued merit badges in animal science and conservation. 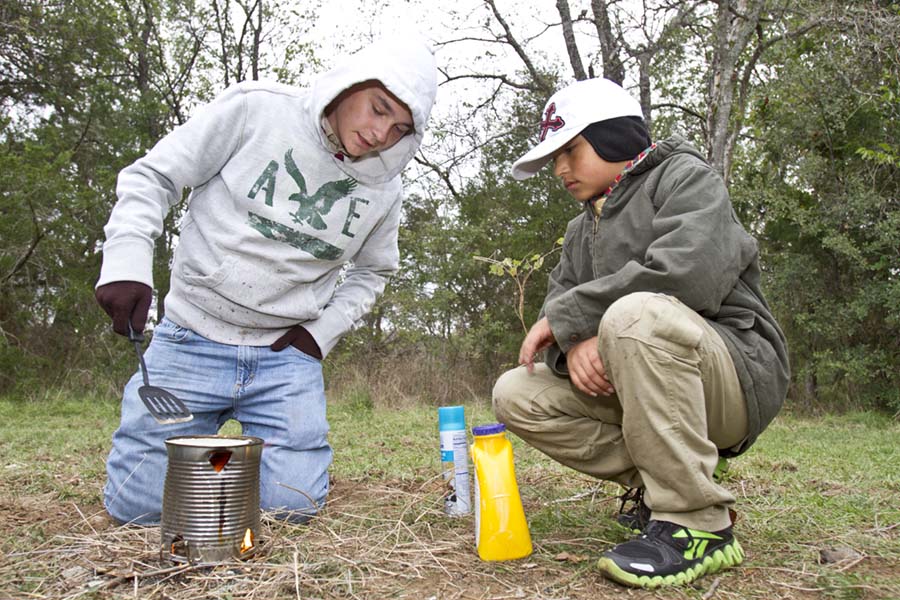 Scouts learn to cook using a can as a makeshift stove. Scouting teaches a number of valuable skills that prepare boys for life.

While the youth enjoy their scouting experiences, many challenges still remain for the BSA-AAC. Camp Simpson is still in need of facility renovations. Damaged facilities have closed down certain activities, and some trails are too thick to be used by campers.

Other regional Boy Scout camps have more amenities and an easier time receiving corporate support. Despite local fundraising throughout the year, it can be difficult for smaller troops and their camps to compete. "Camp Simpson has more potential than any other camp I've been to," said Mark Bruegel, scout master for Troop 5. "It could be the kind of place other troops would drool over."

The Noble Foundation continues to provide granting support to help the camp maximize its offerings. Since 1969, the Noble Foundation has given $850,000 to expand acreage and update camp architecture. In addition, they have provided more than $430,000 to support the council's various programs. "The Noble Foundation and Boy Scouts of America share the similar values of conservation, stewardship and service," said Mary Kate Wilson, director of granting. "The board of trustees appreciate those shared values and want to help provide opportunities for area youth while honoring the shared tradition between our Foundation and the Boy Scouts."

As for the troops, the legacy of interaction, learning and support provides - according to Bruegel - continued possibilities. "Camp Simpson and the local troops have so much potential," he said. "We are blessed because of the Noble Foundation. They are helping us reach that potential."