Farmers and ranchers find answers to pressing questions that face agriculture, and ultimately all of society, at Noble Research Institute.

Jimmy Kinder knew there had to be more to the soil.

In the 1990s, Kinder and his father turned to no-till on their farms in southern Oklahoma. They put down their plows, and, instead of turning the ground over in preparation of planting, they sowed seed right into the soil.

The practice, which had been gaining interest among corn and soybean farmers in the northern U.S., was said to reduce erosion, the loss of topsoil to rain and wind and a contributor to the infamous dust storms that ravaged the Great Plains in the 1930s.

The neighbors thought they were crazy diverting from generations-old tradition, but, after a few years, Kinder started noticing some areas of the farm were growing more forage than they had when the land was tilled.

He tested the soils to find out what gave the more productive areas their advantage, but, according to the tests, the areas were the same.

“If you start giving farmers some technologies, some ways of farming that will actually build their soil so that at the end of 10 years they’ve got a better yield potential than when they started, that would be a great thing not only for farmers but for people in general.”

Kinder thought it must have something to do with the mysterious property of soil his professors had mentioned when he was earning his agronomy degree in college.

“They told us there was something biological there within the soil, but they didn’t know much about it,” Kinder says. “It was talked about more as magic than as science, so we focused on what we could measure — the physical and chemical aspects of soil.”

As a result, soil was typically viewed as a sterile medium that anchors plants and holds nutrients and water. But Kinder was becoming aware that this living component of soil could be his key to success. He just needed to know more about it.

The Beginning of a Partnership

In the mid-2000s, Kinder was at a producer meeting hosted by the Oklahoma Cooperative Extension Service when he met Jim Johnson, a soils and crops consultant at Noble Research Institute (then known as the Noble Foundation).

Johnson, who was also interested in no-till and soil health, struck up a conversation with Kinder. The pair began sharing their thoughts and experiences, and Johnson suggested that Kinder take advantage of Noble’s consultation program to help answer his questions.

In turn, Johnson was interested in learning from Kinder’s on-farm research. Johnson wanted to further test no-till methods using Noble’s research and demonstration farms and add to the agriculture community’s understanding of the practice.

“I knew early on that I wanted to work with Jimmy,” Johnson says. “He was applying new ideas and technologies on his farm, and he had a hunger to learn more about how he could improve his land and its ability to produce food both for cattle and people.”

By 2007, a team of consultants — each with their own expertise in soils, crops, livestock, economics and wildlife — visited Kinder’s farm near Walters, Oklahoma, where he grows wheat both to graze cattle and to harvest as grain, as well as canola, sesame and grain sorghum.

“The best part about the consultants is that they look at my farm as a system,” Kinder says. “I could bring an agronomist out here, but I also need someone to consider the livestock and the economics. There may be a solution to one problem I have. But if it doesn’t consider the other aspects of the farm, it’s not a viable solution.”

Within two years, the Noble consultants turned the tables and asked Kinder to provide consultation to them as part of the nonresident fellows program. During the next eight years, Kinder provided a boots-on-the-ground perspective to help guide Noble’s research and keep it relevant to producer needs. 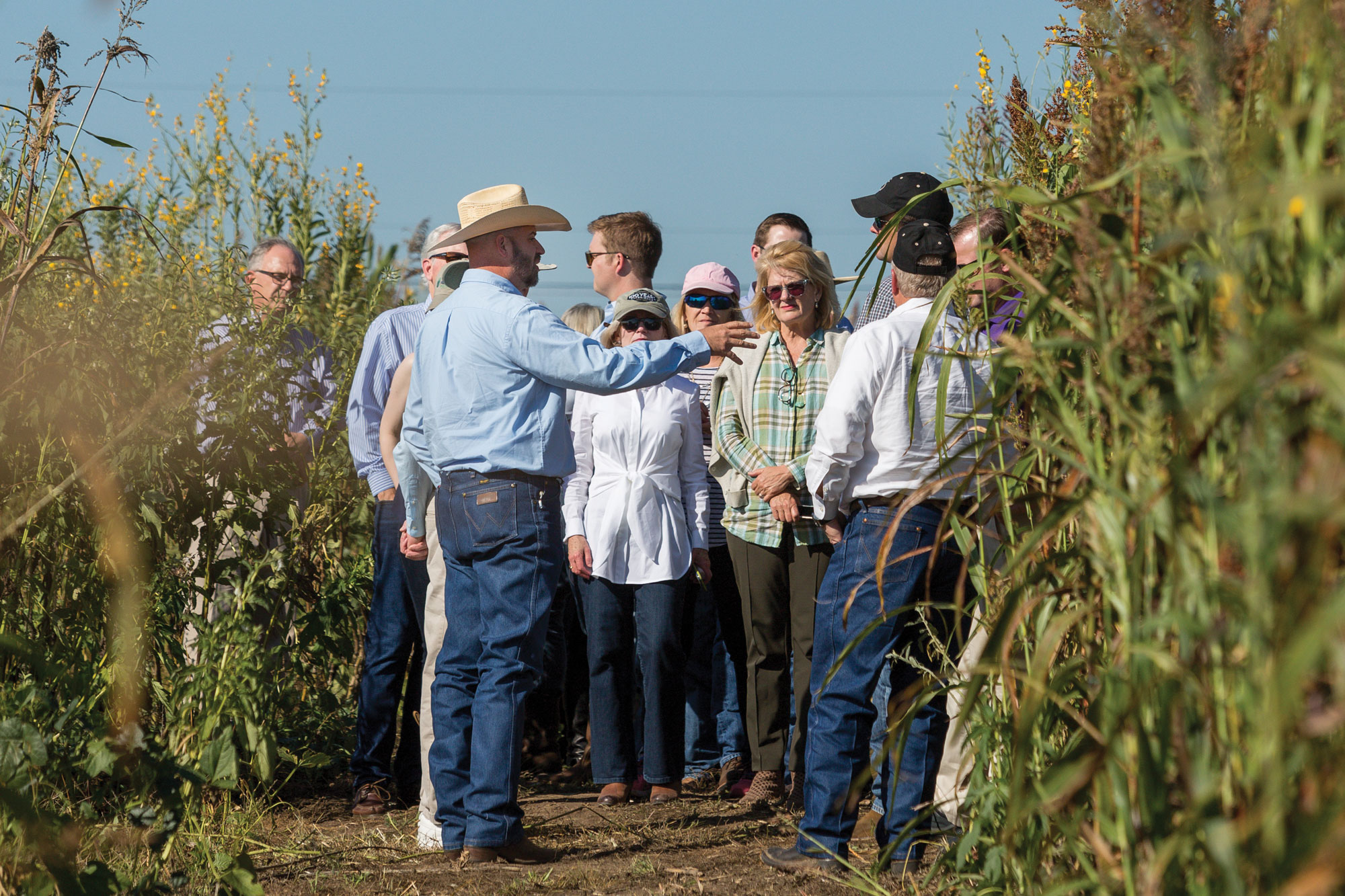 Noble Research Institute conducts research from the basic, which looks at the cellular and genetic levels of how plants grow and function, all the way to the field, where improved varieties of forage crops (those grazed by cattle) are tested and new technologies are implemented in real-world farming and ranching environments.

As a nonresident fellow, Kinder shared with scientists his perspective of what crop traits — like the ability to tolerate drought and resist diseases — are needed by ranchers who grow small grains, like wheat, oat, rye and triticale, as pasture for their cattle.

Once a new variety is on the market, he has also been among the first to try it out on his farm as part of Noble’s variety field trials, which provide a venue for other producers to see how the new varieties grow throughout the season. At the end of the season, producers can learn more by attending an on-farm field day, one of dozens of educational opportunities offered by Noble.

The ultimate goal is to deliver solutions for the challenges faced by farmers and ranchers. These could be improved forage varieties or tools that help producers make management decisions that protect the soil, water and air for years to come.

“If you start giving farmers some technologies, some ways of farming that will actually build their soil so that at the end of 10 years they’ve got a better yield potential than when they started, that would be a great thing not only for farmers but for people in general,” Kinder says. 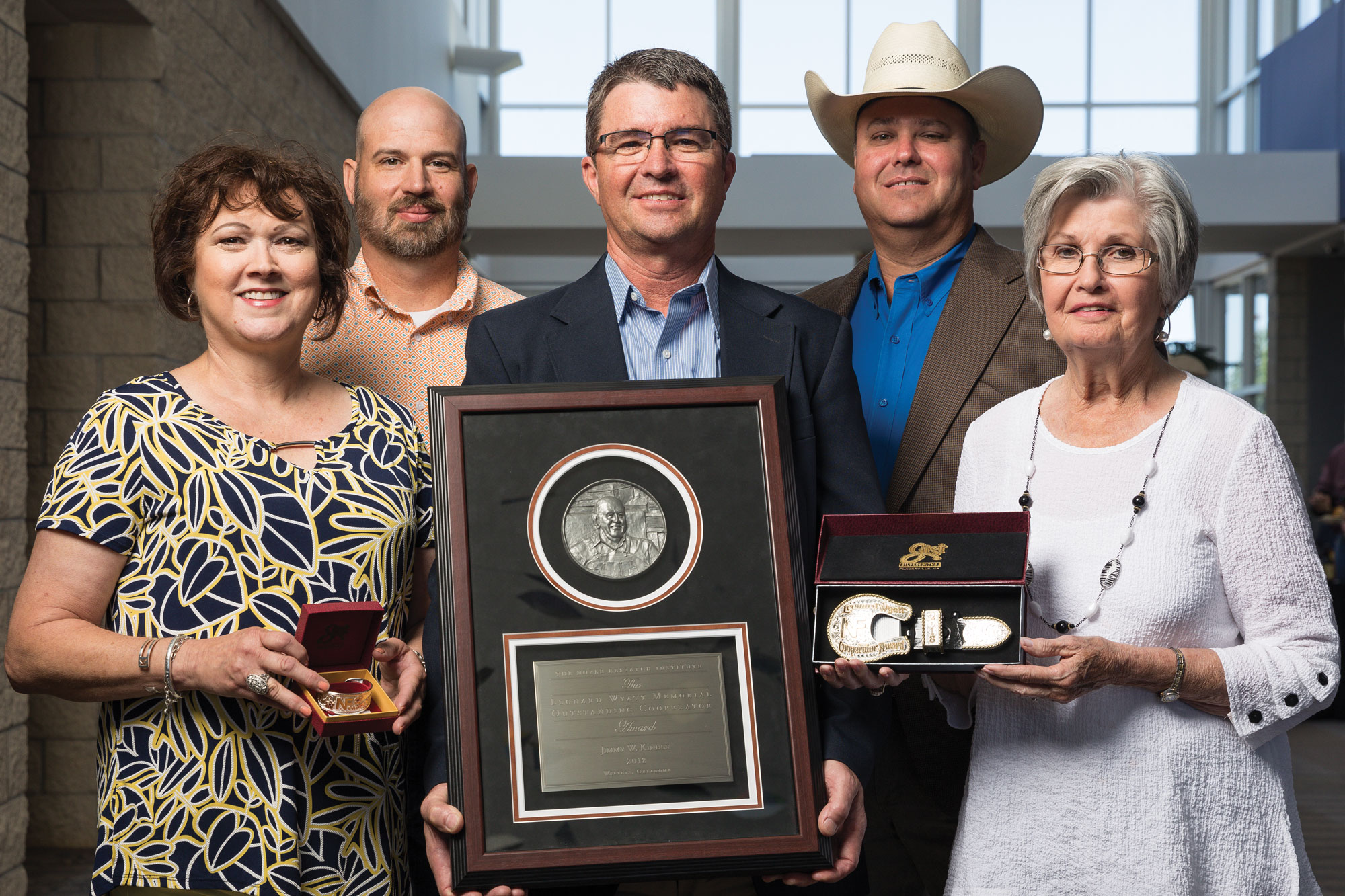 A Step Forward for Soil

More than 15 years after Kinder began noticing improvements to his soils thanks to no-till, he is finally closer to getting some answers about what is happening below the grass-covered surface.

“I credit Noble Research Institute with getting the national and international community talking about soil health,” Kinder says. “It’s opened a generally unknown and underfunded field of study in agriculture and driven a lot of research in that area.”

Spearheading soil research is the nonprofit Soil Health Institute, which was created by Noble Research Institute (then called Noble Foundation) in 2015. One of its first action items has been to determine how producers can measure soil health, including the biological aspects.

“Supporting farmers and ranchers and providing them with solutions that help them improve soil health and face other challenges is the answer to many of society’s problems.”

Research is finding that as soil health improves, so does its ability to capture carbon from the air and sequester it underground. This helps reduce air pollution and enhances the soil’s natural ability to produce plants. Healthy soils can hold more water, and they need less added nutrients from fertilizers, which means less run-off into streams.

Funding for Noble Research Institute comes from the Noble Foundation, which supports agricultural research as a central focus of its mission.

“Supporting farmers and ranchers and providing them with solutions that help them improve soil health and face other challenges is the answer to many of society’s problems,” says Alexis Carter-Black, Noble Foundation director of philanthropy. “This is what Lloyd Noble believed in and why his resources, which are stewarded by the Noble Foundation, continue to be used in support of this mission.”

There are no simple answers, Kinder says. “But Noble Research Institute has the unique ability to take a problem in the field and look at it from the ground up,” he adds. “They can look for answers all the way from a laboratory to field trials to the farm. No one else I know of can do that.” 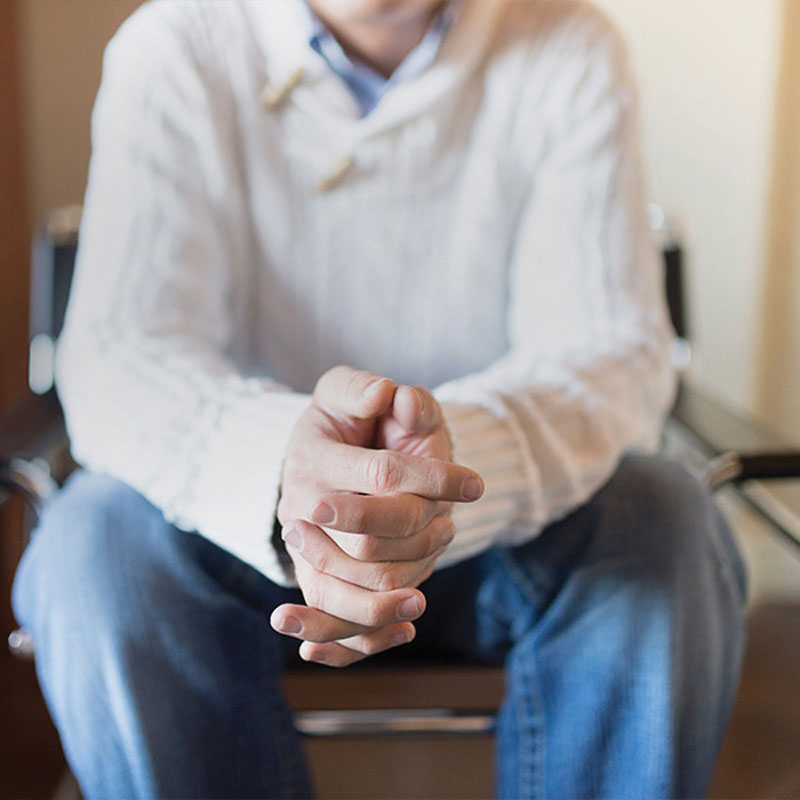